Etowah River Pottery is Deanne and Jeff McWaters: Two people who share
a love of the South, the great outdoors, their pets, their friends and
each other. 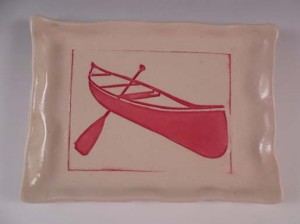 Their story began at Southeastern Expeditions in 1989 as two Section 4
Chattooga River raft guides enjoying their freedom. One thing led to
another and soon the pair were married.

Not ones to follow a typical life, they honeymooned by rafting the
Grand Canyon on a private permit in the cold of December and at low
water levels. Romantic. Cold. Scary. But that’s who they are.

Back in the warmer and dryer south, they ran a vending machine service
business during the 90’s. Road rage being what it is, they sold the
business in 2000 and began a life in the hills of North Georgia. 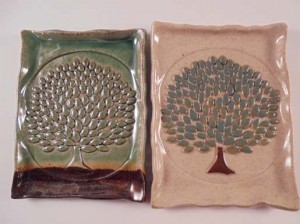 Never ones to stray too far from the water, they occupied their time
running such rivers as the Grand Canyon (again), the Middle Fork of
the Salmon River in Idaho, Rogue River in Oregon, Gauley River, The
Chattooga, the Etowah River and even the Okeefenokee swamp. They
support the efforts of the Upper Etowah River Alliance and the Lumpkin Coalition.

But living a peaceful life with several cats and German Shepherds was
not long lived. Their creative side needed an outlet, and pottery was
calling. So in 2008 Etowah River Pottery officially opened.
Following training and classes at North Georgia College and State
University, personal tutoring by master potter Helen Miller of Bleu
Gallery, the first efforts came out of the kiln. 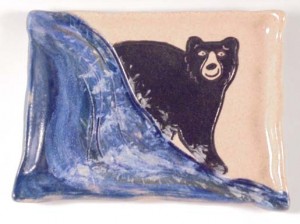 such places as the Bear on the Square festival, Goldrush, and the
Hemlock festival (all in Dahlonega, GA.) You can find their art
anytime at the Humble Candle and Belle Avance
Salon-all on the square in Dahlonega.

Jeff holds a BBA in small business from Georgia State University and
Deanne holds a Bachelor of Arts from Clemson University. Etowah River
Pottery is a licensed business in Lumpkin County GA, and are proud
members of the local Chamber of Commerce.

Drop them a line. If you don’t hear back quickly they’re probably out exploring the nature and beauty that shows through in every piece of
their pottery.

To see our latest products or to find where an Etowah River Pottery & Soap booth will be located next please visit our Facebook page.
Like us to get the latest and greatest updates.

Come see us and join in the fun!